The Delta 1010 is a great PCI soundcard, providing 8 analog I/O channels through a rack mountable external breakout box. Unfortunately, certain older models suffer from problems with the capacitors used in the breakout box. For people who know which end of a soldering iron to hold, it's relatively easy to replace the caps and bring an unusable system back to life.

I was given a Delta 1010 that had a loud hum combined with a rapid, regular "thup". 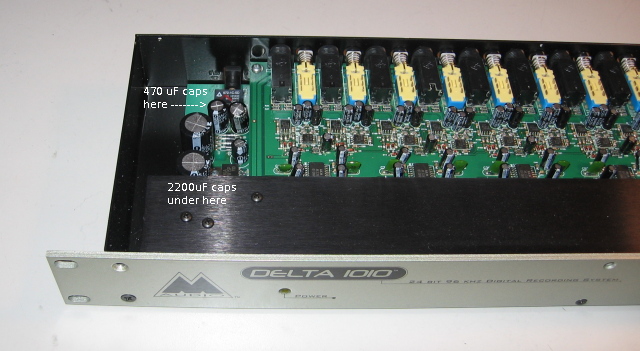 The caps that are suppsedly most likely to give out are the 16v 2200uF (microfarad) caps beneath the metal plate seen when the top is removed.

Removing the plate and the daughterboard showed no obvious damage to the 2200uF caps, but there was a noticable bulge on a 470uF 35v cap just behind a small relay on the circuit board. It's the cap on the right in the picture below. 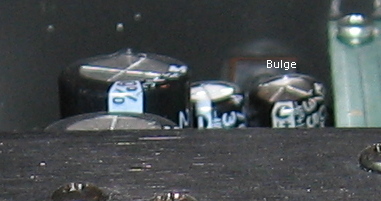 I replaced the 2200uF caps first even though there was no obvious damage because I had a few of them left from the first 1010 that I fixed. If it worked, great, but if not, I'd have to order replacement caps for the 470uF ones. This turned out to be exactly what happened. 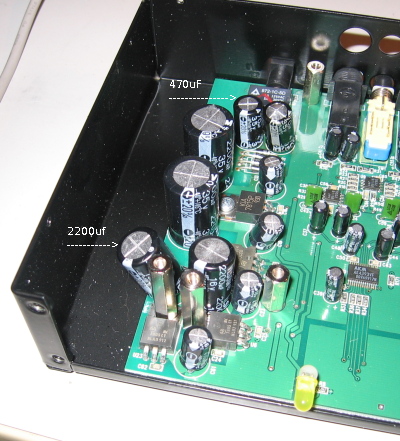 I have had a great deal of success ordering small quantities of electronic parts from DigiKey.

I replaced the 16v 2200uF caps with larger 35v ones. This change in voltage was made based on various postings on a Linux audio group which suggested 16v was a bit on the low side. I had to allow plenty of the cap's leads to remain so that the caps could be bent down to fit under the cover. Here's a shot of the caps after replacement. 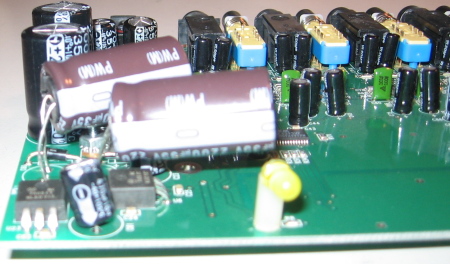 After the 2200uF caps were replaced, the "thupping" sound was gone, but the massive hum remained. I removed the 470uf caps that looked suspicious earler, and found discoloration underneath, heightening my suspicion that the 470uF caps were the issue.

After receiving the replacement caps from Digikey, the 1010 made no more noise when powered on. Success! I was able to move on to my next project, synchronizing the clocks on 2 Delta 1010s under Linux.